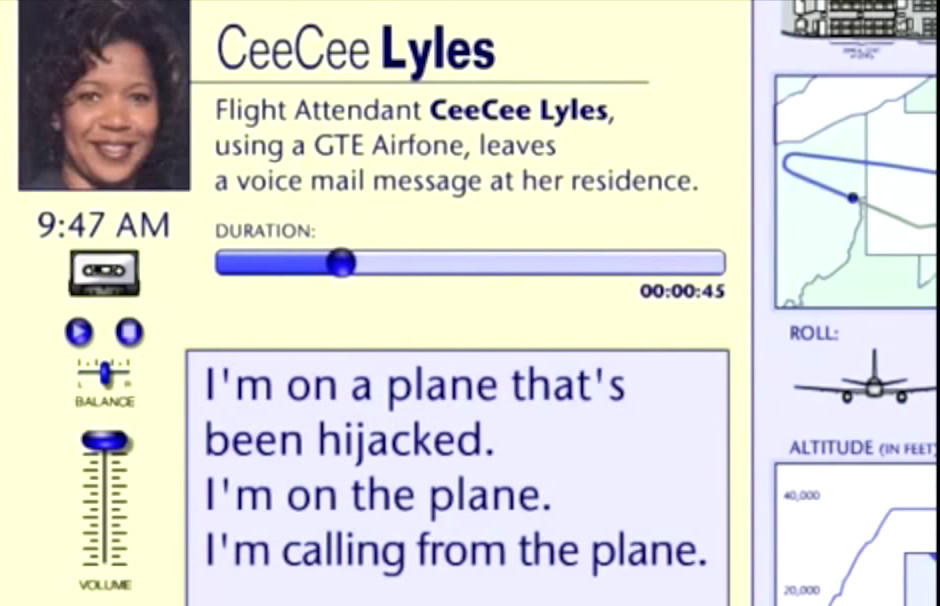 The FBI did not want to release the tapes of the recordings inside the planes. It was forced to do it by the families who had to lobby for 7 months. It happened on April 2002. If they had nothing to hide, why would the FBI resist? In addition, what the FBI accepted to release was very tiny and it went through a ridiculously controlled ritual: the family members were allowed to listen only, not to take notes.

The recordings were released publicly some time later. The entire “9/11 truth” community without exception agrees these phone calls from the planes do not fit the official narrative and are hard proof of manipulation. This is based on simple evidence and cannot be denied. Some theorize the calls could have been “computer generated” imitating the voice of the victims (because it is technically possible). But most researchers suggest they are the result of a simulation that took place with the cooperation of the passengers. They were probably told it was an exercise drill. To have them cooperate nicely. This is the best theory to date because it fit the anomalies found in the voice recordings.

David Ray Griffin wrote and spoke about the phone calls:

We also know for sure the planes were guided remotely. And probably empty of people. Which leaves open the question of what happened to the passengers (and to the real planes, if these existed and if they took off). This is probably the biggest “unknown” in this 9/11 Affair. This is a black hole. We have no information. Either the passengers were killed by the plotters, or they were relocated under other identities. Unless more information appears, we have to suppose they were killed by the plotter after the “exercise”.

We know the idea was to have the WTC towers evacuated, they managed to do it for the WTC7. For the Twins, apparently one radio did not work for some reason (information not checked) and the casualties were higher than expected.

We know the 9/11 project was not focused on killing too many people but to make it visually huge… spectacular, symbolical, historical, mythical… Like a collective subconscious fantasy of our times – see the end of Fight Club – becoming real. Moving America and the World into a new realm.

About the passengers, it would be interesting to follow up on the them and make sure they are all real. Just in case. We already know most of them are. But maybe a few are fake. Or maybe some were relocated. “9/11 truthers” have speculated about it. New identities, with plastic surgery and so on. Nothing is impossible but it remains pure speculation.

Their cold execution is morally hard to imagine. But one can imagine how dangerous it could be for the plotters of such a crazy project, to keep them alive.

In their own words, widows of victims tell us about the criminal cover up and misinformation from the U.S. Government: