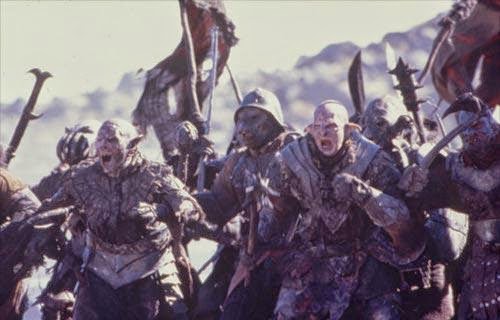 Dear people publishing posts to apologize as Muslims or as Arabs: nobody needs to apologize for these human drones… In the world of J.R. Tolkien, powerful wizards like Gandalf and Saruman can summon an army of Orcs. This takfiri islam is just that. They have been created out of the blue. For a very specific reason. WHEN THEY WILL NOT BE NEEDED ANYMORE THEY WILL BE WIPED OUT BY THEIR CREATORS.

John Yoo (a lawyer of the Bush administration) speculated out loud on what strategies the US should follow after 2005 (right after the Iraq war in order to continue the War on Terror). He suggested creating what later became ISIS… This is what he wrote in the LA Times at the time in 2005: “Another tool would have our intelligence agencies create a false terrorist organization. It could have its own websites, recruitment centers, training camps and fundraising operations. It could launch fake terrorist operations and claim credit for real terrorist strikes, helping to sow confusion within Al Qaeda’s ranks, causing operatives to doubt others’ identities and to question the validity of communications.”

If Al-Quaida or the Islamic State were genuine political movements, they would start by focusing on freeing Saudi Arabia (including Mecca) and other Golf countries from their despicable regimes. The fact that they do not do this RIGHT NOW… proves they are entirely manipulated and have no true political “purpose” other than serve their alleged enemies – and true creators. They are artificial monsters. They are true zombies. They are a proxy army of pigs. They have been engineered to be easily and deeply manipulated. A weapon of destruction in the hands of their progenitors.

Some are very real. But only the ones at the bottom of the hierarchy. Real freaks who believe in what they do… although most of them know nothing about Islam! And if you look higher in the chain of command many of them are agents. Planted sheep leaders. Orc tamers. THEY ARE NOT OUT OF CONTROL. Americans, Brits, Zionists, Saudis and their NATO allies could not continue their plan of remodeling the Middle East using their soldiers. They had no more credit, no more money to carry out their deeds. Also real soldiers are messy. They make a lot of collateral damage that is hard to clean up. Illegal and embarrassing war crimes like Abu Ghraib or Guantanamo and so on. And they are not very efficient on the ground. The US army was not successful in recent wars in the Middle East. Chaos is ruling in Afghanistan and in Yemen. In 2006, the Israeli army despite their air force and their high technology lost their war against the Hezbollah in Lebanon. All of this mess makes NATO’s foreign policy – and in particular US and Israel’s – very unpopular around the world and isolates the countries despite their power.

The Zio-American project for the new century (sprouting out of think tanks such as the WINEP or the infamous PNAC which called for an attack on America a year before 9/11) needed this army of zombies. Summoning an army of living-deads has been decided to be EFFICIENT and ECONOMICAL. It distorts and vilifies Islam so perfectly. It makes the “War on Terror” script believable. It restores the popularity of US and Israel and their allies by funding and promoting an uglier monster – magnified by propaganda videos. It creates sympathy for Israel’s Likud. It covers for the daily crimes on the Palestinian population. The cost and energy these Muslim zombis require is so small: “constant monitoring through heavy infiltration”. What does it take to drive human drones? It is easier that controlling bears or lions in a circus. They do not need much “piloting”: they are 99% automated… They look like normal human beings but they are nothing more than poor young desperate undereducated chemically-sedated deeply brainwashed HUMAN DRONES.

Who Is ISIS? – An open source investigation