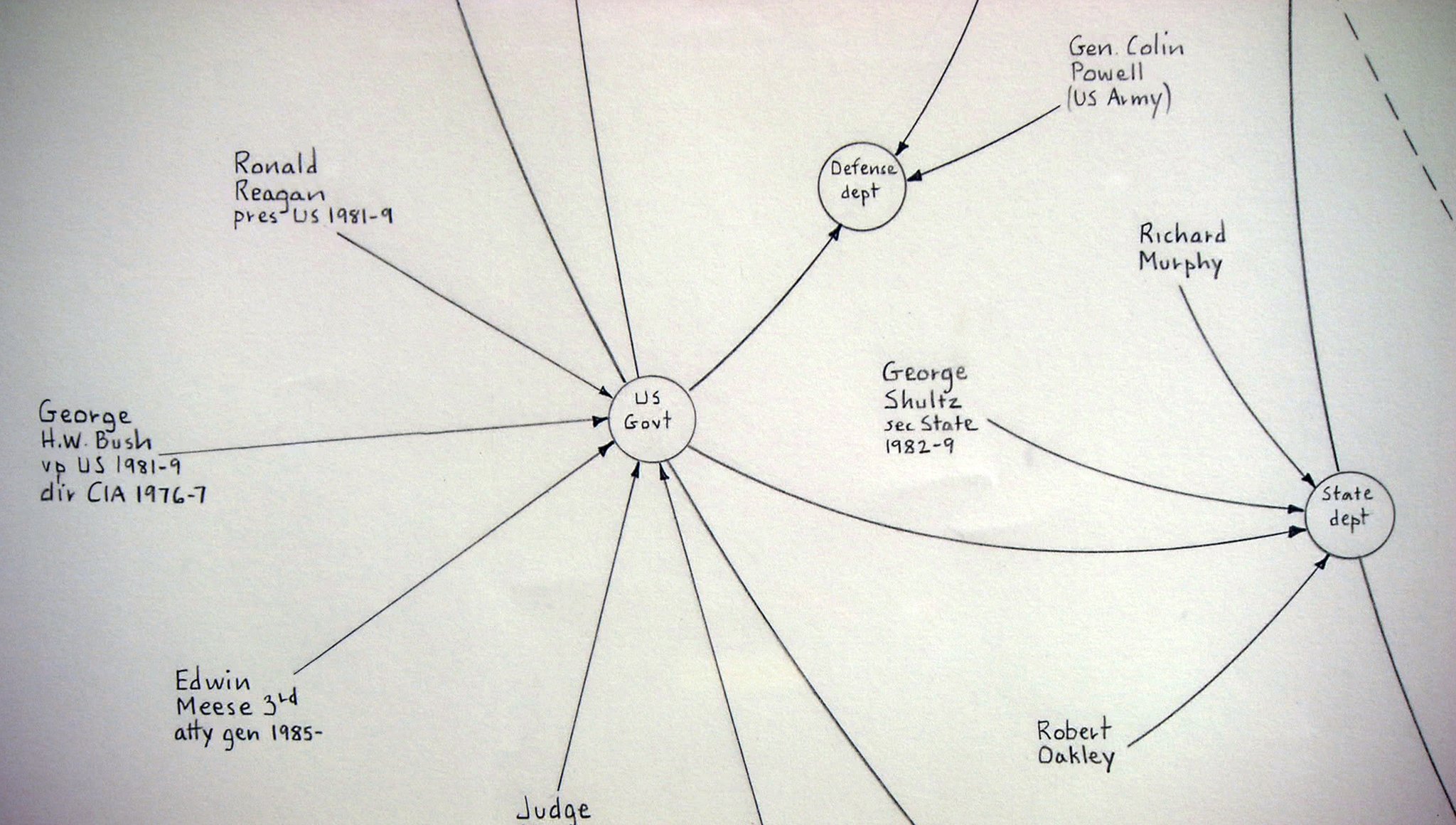 A few weeks after the attacks of September 11 2001, an FBI agent called the Whitney Museum in NYC and asked to see drawings on exhibit by an artist called Mark Lombardi. One drawing in particular showed the intricate financial connections between various Saudi and American commercial interests and specific people like Osama bin Laden and the Bush family. On March 22 2000, one day before his 49th birthday, Lombardi was found dead – hanged – in his studio in Brooklyn. Although the official cause of death was said to be suicide, according to many people – including his mother – murder is more likely.

“Lombardi is more than a conceptualist or political artist,” argued Jerry Saltz of The Village Voice after Lombardi’s death. “He’s a sorcerer whose drawings are crypto-mystical talismans or visual exorcisms meant to immobilize enemies, tap secret knowledge, summon power and expose demons.” But demons dislike exposure.

The date March 22 is written 3/22… 322 is the emblem of the infamous Skull and Bones secret society to which Bush – father and son – belong. The meaning of this number is not clear but it is on their logo. At the time Bush was busy with his campaign for the presidential election. His team and its network wanted to win at all cost. It is not too paranoid to suggest Lombardi’s murder was signed. 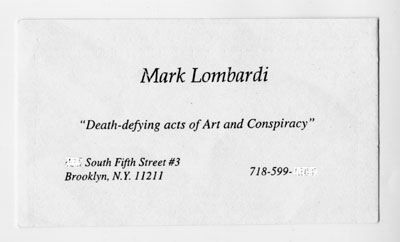 Quoting  an article from last year in Newsweek:

On March 22, he was expected at the opening of the Whitney Biennial in Manhattan but never showed. Friends became worried and called the police. An officer from the 90th Precinct, which is across the street from Lombardi’s studio, found him in his apartment, hanging from a sprinkler pipe. Next to him was a bottle of champagne. That he was not much of a champagne drinker is only one of several inconsistencies about Lombardi’s death. The bigger one is that while he may indeed have suffered from a psychiatric disorder, he was on the cusp of great professional success and thus unlikely to seek a permanent way out. That’s why some have never been convinced that Lombardi committed suicide. “You’re never going to come up with a good reason for him killing himself,” the gallerist Deven Golden, who showed Lombardi’s work, told Goldstone.

Using just pencils and huge sheets of paper, Mark Lombardi draws intricate patterns of curves and arcs to illustrate the links between global finance and international terrorism. The elegant drawings represent networks connecting people and institutions. They tell stories. They are slices of history. They are also visually appealing. They look like constellations of stars… or clouds of lines and points. In an artist statement for a show in the late 90s, Lombardi described his work as follows:

In 1994 I began a series of drawings I refer to as “narrative structures.” Most were executed in graphite or pen and ink on paper. Some are quite large, measuring up to 5 x 12 feet.

I call them “narrative structures” because each consists of a network of lines and notations which are meant to convey a story, typically about a recent event of interest to me, like the collapse of a large international bank, trading company, or investment house. One of my goals is to explore the interaction of political, social and economic forces in contemporary affairs. (..) Working from syndicated news items and other published accounts, I begin each drawing by compiling large amounts of information about a specific bank, financial group or set of individuals. After a careful review of the literature I then condense the essential points into an assortment of notations and other brief statements of fact, out of which an image begins to emerge.

His work explores various financial and political scandals, including the US savings and loan crisis, the Iran-Contra, the collapse of the Vatican bank, the relationship between President Clinton and the Indonesia-based Lippo Group supposedly involved in the transfer of US missile technology to China. 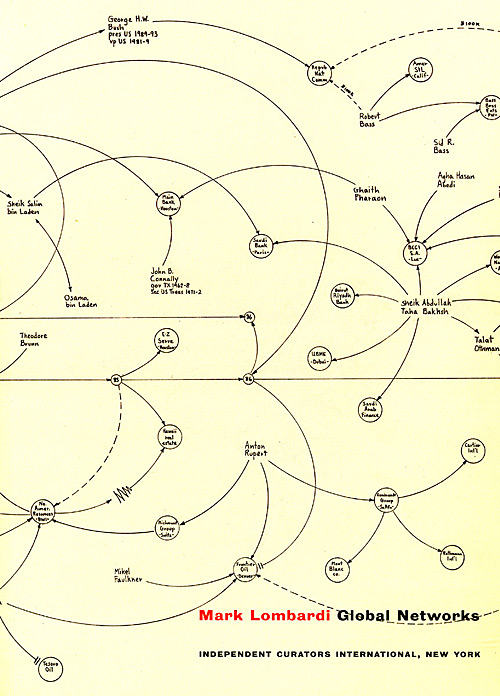 “George W. Bush, Harken Energy and Jackson Stephens, c. 1979-90 (5th Version), 1999” (detail above left) displays Bush’s indirect connection to bin Laden via Houston businessman James R. Bath, who allegedly represented the bin Laden family in the ’80s. The cover art for the book and exhibition Mark Lombardi: Global Networks represents a detail of the same drawing (above right). This is a view of the full drawing (4 x 2 feet).

This is a drawing on the Iran Contra affair: 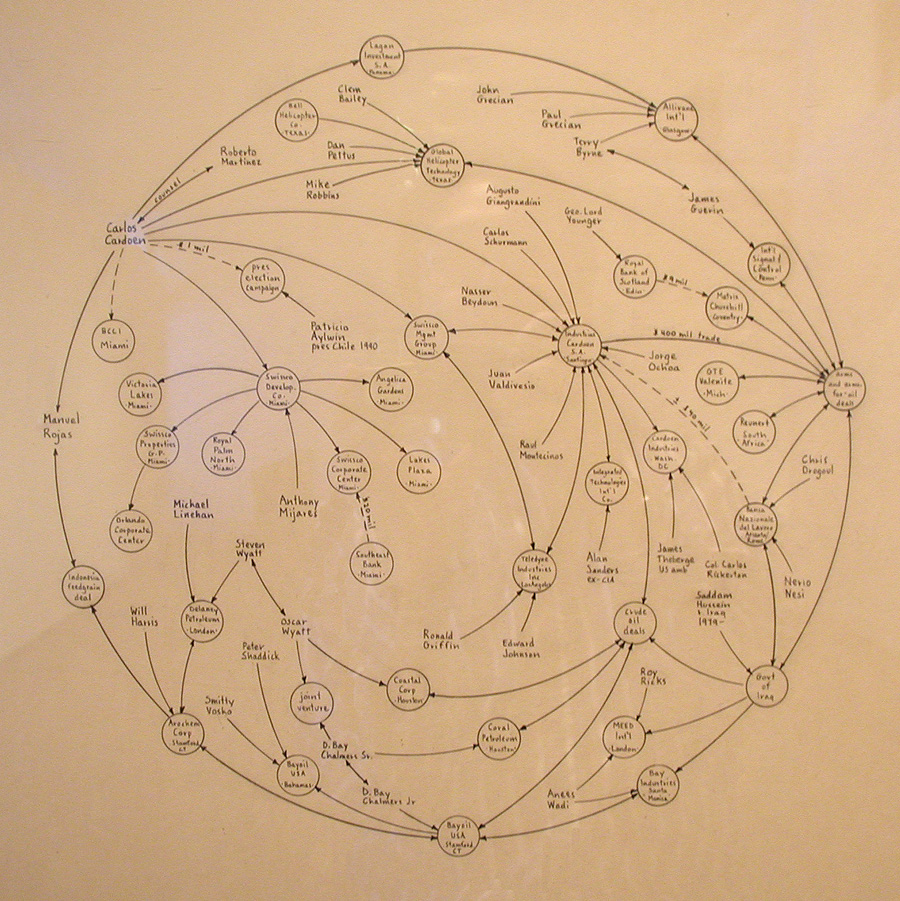 This is another of his drawings. 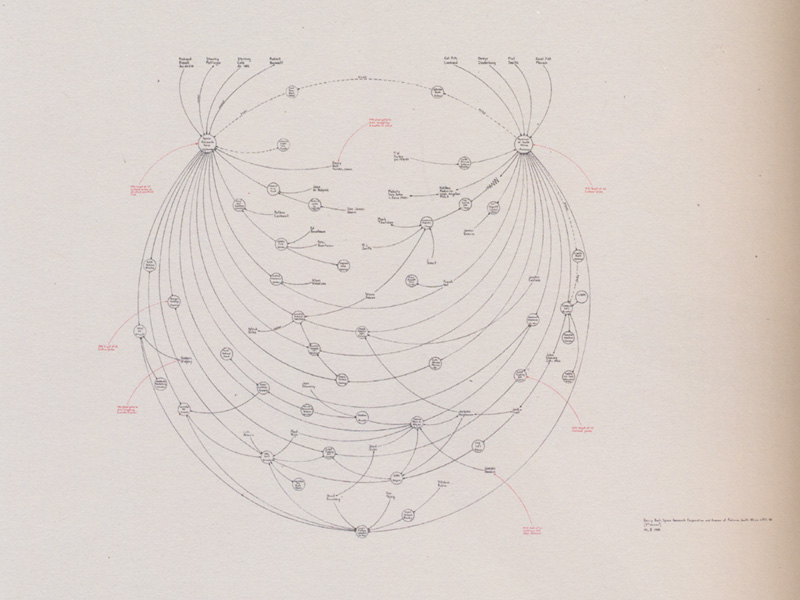 Lombardi’s work is considered conceptual art, but it did not start like this. He started researching by curiosity… like one would kill time doing crosswords… and with time, he became a serious researcher. He made about 14,000 index cards. And he started doing diagrams to make sense of his data. His first diagrams were like a visual aid for himself. 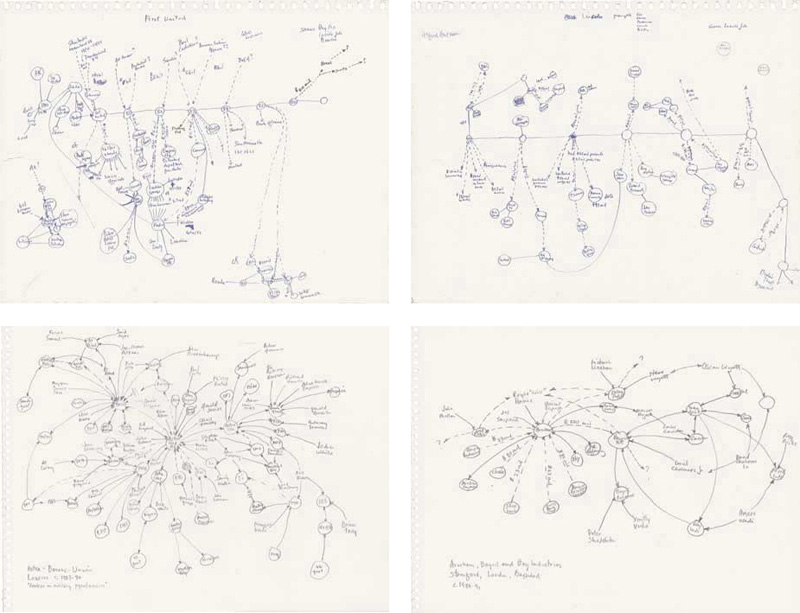 Only later he realized what he was doing was a form of portrait or landscape… better or more interesting than his “real” drawings… He states that all the information he uses is already public – mostly in published books. His work is just an attempt to make them visible. To give them a visual form. Making things visible is what painters do.

In 2012, Mareike Wegener released a 84 minutes documentary Mark Lombardi – Kunst und Konspiration. In English: Mark Lombardi – Death-defying Acts of Art and Conspiracy. The film presents “a dense portrait of Lombardi’s life and work.” The full film (84 minutes) is in German only here and here. It is not available in English for free. A 3 minutes extract is available here. This is a 2 minutes trailer.

Lombardi’s work has been compared with the work of Hans Haacke and Josh On who’s project They Rule depicts the connections between companies through diagrams of their power structures, specifically their boards of directors.

Historian Robert Hobbs has published a comprehensive study – Mark Lombardi – Global Networks – available on amazon. A PDF extract is available here on his website. It was synchronized with the 2003 exhibition with the same title. 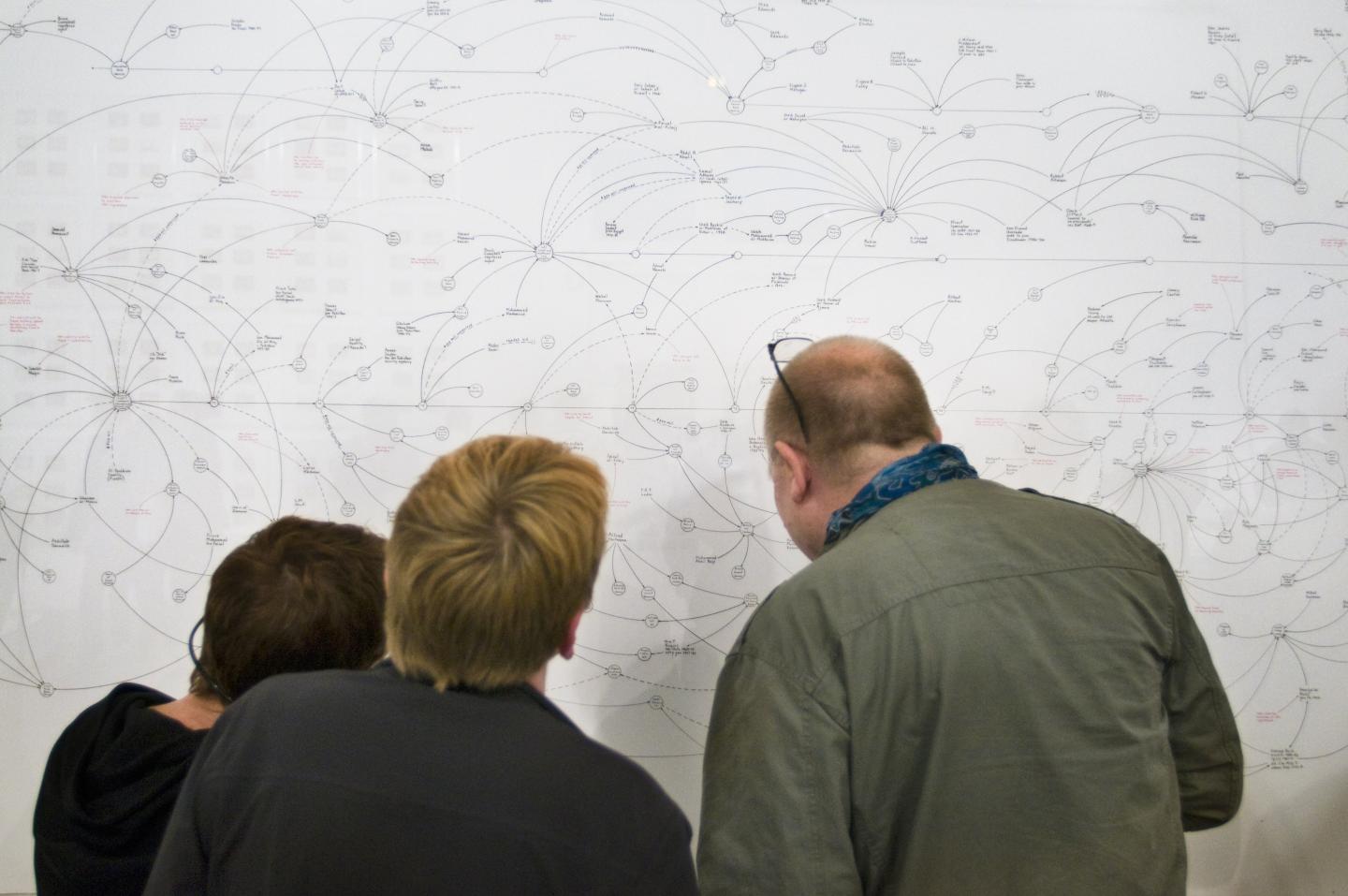 * Lombardi Networks – The mission of this website is to represent all Lombardi works electronically as processable data structures made public via the net and usable for everyone. This is an initial report (PDF, 4 pages) from 2013 by Robert Tolksdorf. In July 2016, seven networks are already online.

* “Learning from Lombardi” – A text from a 10 minutes talk by Benjamin Fry at a panel on Experimental Design.

* Mark Lombardi’s page at Pierogi Gallery – A selection of drawings

* A Spanish TV show (almost one hour) on the Art and Work of Mark Lombardi (La Brújula N° 01 – Mark Lombardi: Del arte de conspirar a la conspiración como arte) is available on YouTube, in Spanish only.