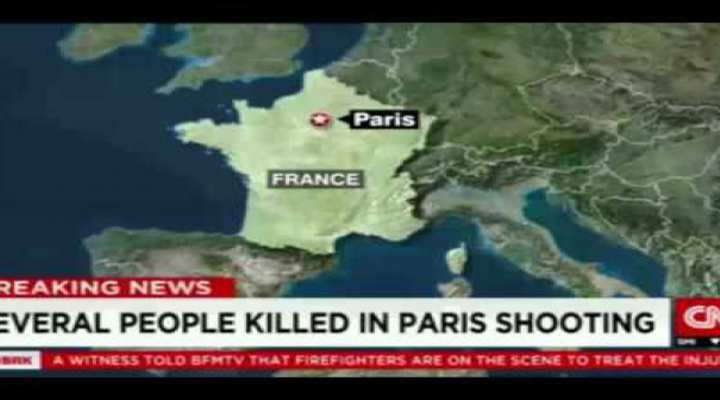 Typical signs of a false flag operation were noticed around the event of the Paris terror attack on November 13, 2015. It was a “multisite” attack. This is a quick list of the main “problems” surrounding this gruesome massacre.

It is advised to check the official story of this event first. (Wikipedia is usually good at summarizing the false government narrative in manipulated terror events.)

This is a preliminary article. It does not cover all aspects the event and it is missing a lot of details.

* According to Patrick Pelloux, on the morning of the Paris shootings on November 13, a special exercice/drill was organized for firemen and medical emergency services on simultaneous “multiple site” terrorist attacks. He says this is why they were well prepared to respond to what happened. In addition, on that same fateful day, there were 2 different News TV teams documenting the groups of firemen near the location of the shooting (precisely the groups that were called on the scene).

* This is undeniable evidence of prior knowledge. The newspaper The Times of Israel published an article reporting an alert was received by the French Jewish community on the morning of the attacks (Friday 13). The article was published on the next day (Saturday 14) and it clearly states this alert was issued on the morning of the attack (“Just Friday morning (..) were informed”). The same article was modified 3 days later (Tuesday 17) into something more vague (“For months (..) have been warned”).

The person who received the alert and who said the French Jewish community received it, is Jonathan-Simon Sellem, the French-born Israeli editor of the ultra-zionist French website JSS News.

This website has a history. It knew “too much and too early” about the perpetrators of the Charlie Hebdo attacks back in January… JSS News released the names and the photos of the alleged killers before the French police and any other media did (with an awkward error adding a third person who turned up to be innocent).

See the snap shots of the article from The Times of Israel below – before and after the modifications. (It was published by investigative journalist Hicham Hamza on panamza.com)

* After 40 years of running the venue where the big shooting happened (The Bataclan), the Jewish owners sold the place on September 11th, 2015 (about 2 months before the attacks) and left the country…

* The picture of the inside of the Bataclan – which was propagated online very early – was posted on the twitter account of  Bart Nijman. Journalists contacted him to learn about his source. He said it just popped up in the internet in a google search… When pressured he finally admitted to the reporter Bosch van Rosenthal (on Twitter @eelcobvr) that the picture came from the twitter account called IsraelHatzolah (see snapshot below).

The account promotes the organization United Hatzalah, supposedly something similar to the red cross, but in fact a far right Israeli organization related to the Israeli army. (Note: This same organization was present at the Brussels bombings another terror event that happened later on March 22, 2016.)

The international director of this “para-medical” group is Mark Gerson. Believe it or not, this guy was the executive director of the infamous PNAC (Project for a New American Century). This neocon think tank – whose members were linked to the Bush administration – wrote in 2000 that an attack on America (“a catastrophic and catalyzing event – such as a new Pearl Harbor”) was necessary to trigger an upgrade of the US military with new technologies and what would later be labeled the “War on Terror”.

* French military officials confirmed later what they had already declared earlier… That six fully armed soldiers (not policemen) were present in front of the concert venue (The Bataclan) and that these soldiers refused to help the police, while people were being shot inside… pretending they had not received the order to do so… The police asked to borrow their guns and they refused. The soldiers were part of the special anti-terrorist force that the French call “Force Sentinelle.”

MEMRI pretended they found the email. This organization was already exposed as a MOSSAD entity by Norman Finkelstein, a well-known scholar on Israel/Palestine. “They use the same sort of propaganda techniques as the Nazis,” he said. “They take things out of context in order to do personal and political harm to people they don’t like.” MEMRI was founded in 1998 by Yigal Carmon, a former Israeli intelligence officer and Meyrav Wurmser, an Israeli-born American political scientist. MEMRI’s other founding staff include people who had formerly served in military intelligence in the Israeli Defense Forces (IDF). From its Wikipedia page: “Critics charge that despite portraying itself as neutral, it aims to portray the Arab and Muslim world in a negative light through the production and dissemination of incomplete translations and by selectively translating views of extremists while deemphasizing or ignoring mainstream opinions.”

MEMRI is an organization similar to the infamous SITE managed by Rita Katz (starting in 2002). It was remarked they both shared the same IP… Which means they are using the same internet connection (the same office). Rita Katz pretended in an interview that she started her career in 1997 working for an unspecified Middle East institute after posting an add in a newspaper. Her group SITE is the one who found all the fake Bin Laden videos and the fake ISIS execution videos (with victims in orange suit). When they were accused of having released them before the Islamic groups did, they replied “we beat them with the release.” (It seems they do not even care if they lies make sense or not.)