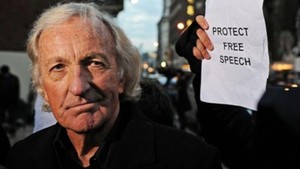 John Pilger hopes that his last documentary – The War on Democracy – and his forthcoming one, will encourage colleagues to take a more critical view. “If journalists can look behind the press-release version of events, or push back the screen of what is often propaganda but rarely recognised as such,” he says, “then we will produce true journalism, not a form of PR. We ought to be the agents of people, not power.”

The War On Democracy (English subtitles) from John Pilger on Vimeo.

When Pilger speaks to journalism students, he is convinced “many start with the same passion [he] started with” and implores them to “keep [their] principles as [they] navigate the system.” His watchword remains, “Never believe anything until it’s officially denied,” a favourite expression of reporter Claud Cockburn, father of Independent journalist Patrick Cockburn.

John Richard Pilger (born 9 October 1939) is an Australian-born journalist based in London. Pilger has lived in the United Kingdom since 1962. Since his early years as a war correspondent in Vietnam, Pilger has been a strong critic of American, Australian and British foreign policy, which he considers to be driven by an imperialist agenda. Pilger has also criticised his native country’s treatment of indigenous Australians and the practices of the mainstream media.