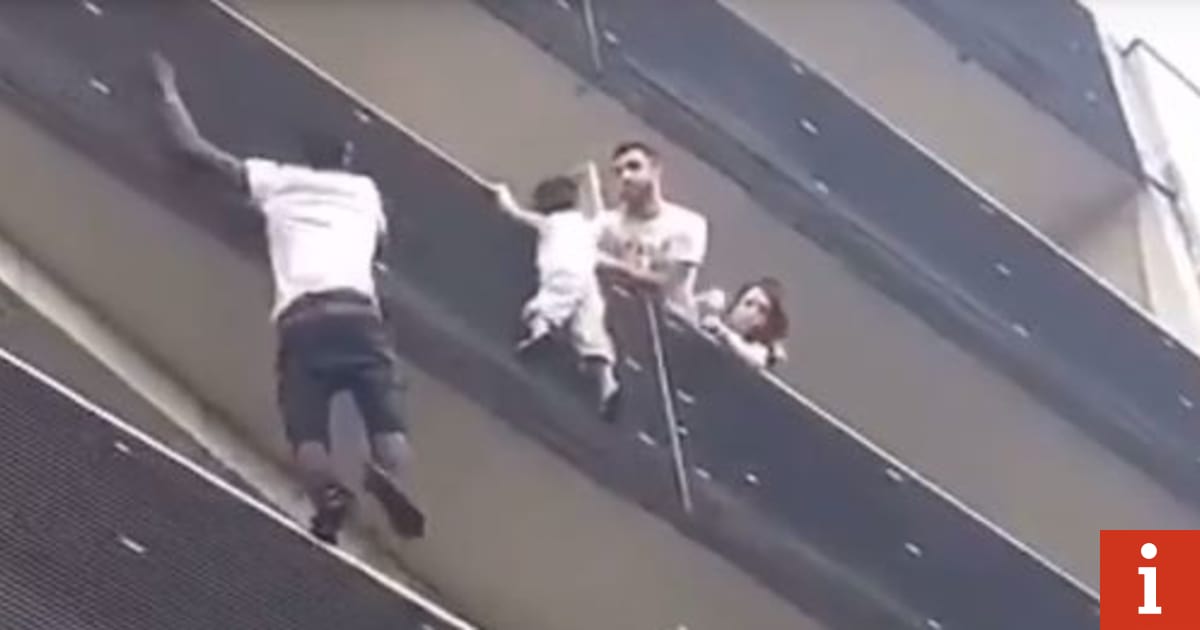 A video went viral showing an African migrant – Mamoudou Gassama – climbing the facade of a building in France to save a child who was hanging from a balcony. The video shows him climbing 5 floors using his hands alone and then lifting the child. This event was fabricated. It was a publicity stunt – probably state sponsored – to improve the image of the migrants. And it was relatively successful.

The President of France immediately offered him a citizenship and a job as fireman. They met and were photographed together and the event was very loudly advertised on all channels for a couple of weeks.

Few people have noticed the migrant did not really save the child. The child was hooked with a harness and controlled by two other people on the balcony… These people are already holding the child… But they seem to hesitate to lift him up. Actually they are controlling a harness and helping unhook this special harness at the good moment…

Why would one hesitate to save a child? asks “nicely” the comedian Trevor Noah in his Daily Show… It looks as if they were waiting for the climbing hero to get up there.

On a French TV channel, a respected guy questioned the event… and it resulted immediately in a little scandal… He was treated of crazy conspiracy theorist and so on… This video is in French.

A very typical censorship process. Attacking and punishing the messenger and dramatizing the scene in public as much as possible… to shame and “educate” the masses. André Bercoff was the subject of a true inquiry (or actually inquisition) by the organization controlling the media in France (the CSA). This is another interview where they try to have him repent. (French)

This is a video (French) showing how the child was very probably safely hooked on a special harness hidden under his clothes.

For the people who do these things, it is just another PR event. An advertising to improve the image of the migrants. It is the opposite of a (synthetic) terror event… which also aims at changing people’s perceptions on certain topics… but using fear.

For example the repetitive school shootings – such as Sandy Hook (2012) – aim at demonizing automatic weapons (and demonizing aspects of the US constitution: too much freedom is bad because humans are too crazy). They are intended on the long term to change how people perceive weapons. Not as something neutral, or for defense, but as something negative and crazy. The people behind these programs think of themselves are social engineers with good intentions.

The fabricated Islamic terror events…  they aim at keeping the “war on terror” alive and a general state of emergency. For the people to look at the governments for more safety. At Orlando (2016) it was a message to the LGBT (an anti-islamic and pro-Israel message). In Paris (Charlie Hebdo 2015) it was PR for “free speech” and for Israel.

These events aim at solidifying the “west” (NATO) against a fabricated/controlled enemy and at backing/funding the war machine. This is modern warfare. Where things do not need to be real anymore.

An author came up with the term Society of the Spectacle. Another author with the word Hyperreality. When reality and fiction are totally blended together like sugar in water. Everything becomes communication and marketing. At some point even the sky feels fake. Osama Bin Laden died in December 2001. His character was kept alive for 10 years with fake videos. His assassination in 2011 was a movie.

In a world that is really upside down, the true is a moment of the false.”