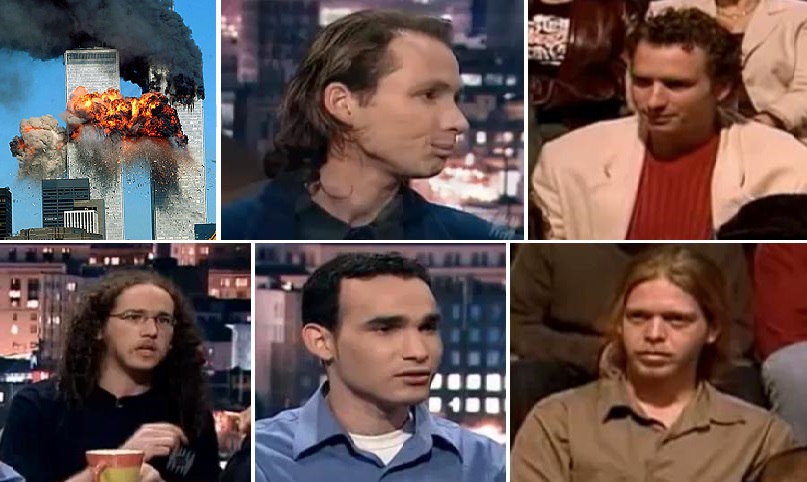 The 5 Israelis in the white van who were arrested in New Jersey on Sep 11 2001, turned out to be spies. They were reported earlier in the day filming the event and celebrating while people were dying. Their strange attitude was witnessed by a citizen who called the cops. When arrested they said their purpose was “to document the event.” This implies they had prior knowledge (at least) of the attack. And more realistically it makes them prime suspects in the team who wired the towers for demolition.

Another similar truck was apparently stopped, loaded with explosives, with two suspects in it. The reports mention this second arrest happened on the George Washington Bridge. This appears to be an extension of the plot: to blow up the bridge! But this report was not followed upon later. This story was just dropped. So the evidence for this second truck is weak. The only verified story is the arrest of the white truck and the 5 Israeli agents.

This is what we have:

* One white van has been arrested with 5 Israelis in it. We have the news reports, we have the interview of the witness who called the cops because she saw them celebrating, and we also have the interview – many years later – of the young cop who arrested them. This confirms everything. Their white van had the sign of the company they were working for – “Urban Moving Systems Incorporated” – later proven to be a cover for the Mossad. Their huge logo was a skyline of NYC with the towers and a plane flying towards them… This company disappeared quickly after the operation. About 2 months later the agents were liberated quietly and sent back to Israel. To the cop who arrested them on the day of the event they said their purpose was to “document the event”… automatically admitting prior knowledge. They had almost $5000 in cash in their socks, box cutters and numerous fake passports. They also said to the American cops with a very strong Israeli accent, that they were not America’s problem, but that Palestinians were America’s problem…

* There is a report of a call that alerted the police about a van with people dressed up in robes – like Arabs – according to the caller. This call sounds very suspicious. The caller pointed the police to a specific bridge or tunnel… After this call instead of running to one bridge or tunnel, the police decided to control ALL of them. This lead of the arrest of a van/truck… (or was it the same one with the 5 guys? or was it a second one? this is hard to figure out)

* According to one report by Dan Rather, one “truck full of explosives enough to do great damage to the George Washington Bridge” was stopped with two suspects being interrogated by the FBI… This was a news report that needed a follow up, but it was never mentioned again. Another very similar report by a news woman said “2 or 3” people were arrested in a big “van” (not using the word “truck” this time). And it was said to be full of hundred tons of explosives… The arrest was made either on the bridge or near it… or on the New Jersey turnpike. In this second news reports things are blurred somehow, the woman (a) says 2 OR 3 suspects and (b) gives 2 possible locations for the arrest.

This van/truck had the sign “Urban Moving Systems” on it with the logo of the company: a drawing of NYC landscape with the twin towers and a plane flying over them! Pretty insane…

Similar white trucks were observed in Manhattan near the WTC in other reports.

It is hard to be sure if the second truck with explosives around the G.W. bridge is real or if it is only a planted news report…We know many TV news reports on 9/11 were planted scripts. So these contradictory reports could be a pretty cheap way to vamp up the panic a little more by suggesting the original plot was bigger… and heroic cops managed to stop some of it.

If we consider the empirical facts, we can only be sure of the arrest of the 5 Israelis. For sure this was not planned… It was an accident for the plotters. If we forget this accidental arrest that was not supposed to happen, and we consider only the (obviously fake) phone call and (maybe fake) news report about explosives, we get a different story involving Arabs in robes roaming around the bridges and tunnels in white vans full of explosives…

Also about the logo/drawing on the van with the towers and the plane?… Was it intentional? It is too much to be true. It sounds a bit like the name of the group Israeli art students called “gelatin” (in reference to the explosives used for the towers). They were arrested a few weeks later. They also turned out to be Israeli agents. Is it a sort of irony or arrogance?… It could be intentional in order to direct the possible inquiry towards the vans… and link those vans to Arabs (not Israelis).

It is not impossible that the second van arrest was real. If so, the local cops and the FBI really would have stopped a very serious extension of the plot!

Interview of the cop who arrested the 5 Israeli agents:

This is a page summarizing the Israeli spies connection with links and sources:
http://whatreallyhappened.com/WRHARTICLES/fiveisraelis.html

Two employees of the US-Israeli company Odigo (located not far from the Mossad headquarters in Israel) received a warning text message about 2 hours before the attack in NYC. It gave no details about any specific location (so maybe useless, unless one interprets it as an advice to stay quietly at home on that day). The employees told the FBI about it later after the attack and gave them the IP address. (And there was no follow up in the news.) Odigo had offices 1km (about 2 blocs) from the WTC.

In his presentations, Christopher Bollyn (who wrote a book and many detailed articles about the Israeli and American Zionist network involved in 9/11) claims that 4000 israeli/jewish persons received a text message in hebrew through Odigo. Why 4000? How does he know? He gives NO proof and NO source for this allegation.

Although a total of three Israeli lives (2 in the planes and 1 in the towers) were reportedly lost on 9/11, speechwriters for President George W. Bush grossly inflated the number of Israeli dead to 130 in the president’s address to a joint session of Congress on September 20, 2001.

The fact that only one Israeli died at the WTC, while 4,000 Israelis were thought to have been at the scene of the attacks on 9/11… naturally led to the widespread rumor – blamed on Arabic sources at the time and said to be antisemitic – that Israelis had been forewarned to stay away that day.

The case of Reverend Stephen Sizer attacked for mentioning Israel’s role on 9/11: