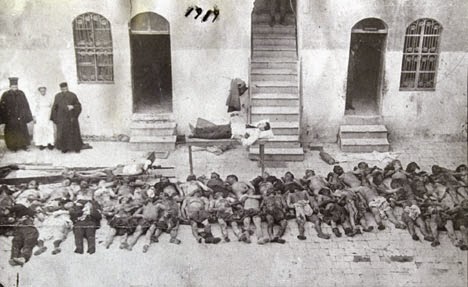 Zionism has been working hard to trademark the word “Holocaust” with a capital letter (etymologically it means “sacrifice by fire”) calling other genocides and in particular the Armenian genocide that preceded it, a minor or “meaningless” event. The idea is to promote and protect the concept of the Jewish genocide as unique in nature (as Holy) and above any other event in horror – since the beginning of History. Because of the industrialization of Death in the alleged “death camps”.

During the 1960’s and 1970’s, due to the work of a bunch of historians (some of them labelled “revisionists” or “deniers”) the Jewish Genocide – or in other words The Destruction of European Jews by the Nazi regime – has been questioned. It has been researched in a serious, historically documented and scholarly manner, decades after the events and the spirit of war propaganda that prevailed at the time. Some historians suggested the genocide was not a planned “extermination” for start to finish, as it is stated in the official narrative. Some argued there was no gas chambers. That it was a was propaganda myth… They said the concentration camps were labor camps, not death camps… specially at the end of the war… and specially at Auschwitz… Most of these “revisionist” historians agreed on one thing : the gas chambers did not exist the way they are depicted in the official narrative. They allege the death rate in those camps was blown out of proportion for the sake of war propaganda at the Nuremberg trial in 1946.

To counter those claims, the Zionist regime, for whom the Holocaust had become a Cult by now, and around which their colonial ideology was wrapped and justified… felt compelled to fight back. Israel started a covert war against western scholars. They had real “expansion” wars to manage… and they badly needed sympathy. Protecting the Holocaust Mythology blindly, despite the truth or not truth, was considered a war effort in favor of Israel, a tiny country surrounded by evil Arab communists and terrorists who hate Jews…  During the 1970’s and 1980’s, Israel and the Zionist networks worked on a new wave of propaganda documentaries, movies, books… and on different forms of pressure in Europe and the USA to secure support and sympathy. Some “new” witnesses suddenly popped up and spoke… the accounts of certain survivors who had testified a few decades ago, was a little different, adding “extra” horror stories, insisting and add substance to the gas chamber narrative (it was not very important before the 70’s). It was a war of disinformation.

The word “Shoah” was introduced in 1981 as the title of a documentary, to coin a unique word better than Holocaust, and further “mythify” or “sacralize” the historical event. Claude Lanzman the author of the documentary did a second documentary immediately after giving the Israeli army a cool name as well. The criminal Israeli army involved in ethnic cleansing and genocidal persecutions of Palestinians for decades, was given a epic name… an angelic makeup… like the ancient knight would give cool names to their weapons.

In Canada, in the 1980’s, a special law against “hate speech” has been created specifically to help prosecute free speech about the Jewish genocide… In France, in 1993, a law was introduced to ban free speech on this topic even for academic historians.

At the time, not only the “exterminatorial” nature of the event was being seriously questioned… but the number of 6 millions was also revalued… Revisionists argue for a number below 3 millions… something from around 700.000 up to 2.5 million more or less.

The estimated number of Armenian killed by the Turks is agreed to be around 1 to 1.5 million. Ironically, although Turks continue to deny the event up to the present day, there are more historical proofs about the genocidal nature of this event than about the one perpetrated by the Nazis… The Turks motivations were clearly to kill, not to make them work (to contribute to the Nazi war effort).

The tangible facts about the Nazi camps say they were labor camps, with a hospital, day care for kids, concerts, plays… and swimming pools! Nazi were using what they considered political and racial enemies such as Communists, Jews, Gypsies and others in a way that was useful for them during a difficult war, in particular on the Eastern front… They also used some for human experiments. (Note: Few people are aware that the USA carried human experiments on racial minorities in the 1950’s, years after WWII.)

It is undeniable the Nazi ideology promoted a delirious “state sponsored racism” towards all races deemed inferior according to “science”… It is also undeniable there were cases of true Nazi psychos going free style.  On the Eastern Europe as the situation deteriorated, Nazi commandos were ordered to act like a killing mob. They massacred many Jews in horrible ways. They try to impose terror over the population to discourage dissent and sabotage… Eastern Jews were considered communists. And they often were communists.

This “genocide by bullets” was the real genocide according to revisionist historians. Mass murders by bullets and various “improvised methods” by special death commandos. In an early phase during the invasion of Poland, it seems carbon monoxide from truck engines was used on several occasions in Poland.

Nazis had more political, racial and cultural despise for Eastern Jews. They had less “use” for them. They also had an enormous resentment against Poland.

It is alleged there were a few early extermination camps with small primitive gas chambers using carbon monoxide. They would have been completely destroyed and the bodies dug out and burned so as to leave no traces at all… Some historians criticize the reality of this episode. Others validate it or consider it a possibility such as David Irving and David Cole-Stein. Nazi documentation (that could have been forged) evaluate the victims of this early extermination phase alone to about 1.5 million.

According to revisionists, in the Ghettos the quality of life and the mortality rate was worse than in the camps… In the camps things were organized the Germany way! For example human hair was recycled (to make silent shoes for war submarines and avoid getting spotted by enemy radars).

Jewish-born writer Edgar Hilsenrath (born in 1926 and alive in 2015) is probably the most politically incorrect and most important Jewish writer since WWII. Although he is not promoted and one would say systematically “suppressed” in mainstream media for many decades… He wrote very important and significant novels. He wrote on particular topics very significant in the perspective of “Jewish Identity Politics”. Right after the war, he went to Israel, but he did not adapt to the Zionist reality of a “Jewish state” and left a few years later. He went to New York City, but he did not like it either. So he came back to his country Germany where he still lives.

His book Night describes life and survival in a Jewish ghetto in the Ukraine. It is his first important novel based on his life experience. It is ultra-realistic and sarcastic. It reflects the real horror of surviving in the Ghettos at the time. It is the perfect counter-novel to the famous and ultra-promoted propaganda book called Night by Elie Wiesel (who has been exposed as a fraud).

In his grotesque novel The Nazi and the Barber, published in 1971 in the U.S., he tells the story of a young German SS mass murderer, who later assumes a Jewish identity and escapes to Israel, becoming a dedicated Zionist… The book plays on the obvious similarity between Nazism and Zionism.

The Story of the Last Thought, published in 1990, is about the Armenian genocide. For a reason. It is his answer to the sacralization and exploitation of the Jewish genocide by Israel and the US Zionists.

Strangely, or preferably NOT so strangely, his page on Wikipedia in English is extremely tiny… He is never promoted and written about in the Jewish or in the American press! There is a very disturbing silence around his work.

In Germany, The Nazi and the Barber was even indirectly censored: as insane as it sounds, he was refused by 60 German publishers… and had to publish in the USA first.

According to Dagmar C. G. Lorenz, “Hilsenrath calls things by their proper names and portrays life first and foremost as physical existence, of whose details the reader is constantly made aware: birth, nursing, feeding, sex, and excretion accompanied by feelings of pleasure and pain. The rhetoric of politicians and political theory are shown to be the schemes of beings ultimately dependent on these bodily processes and subject to physical desires. Hilsenrath’s very approach is a protest against disrespect toward the mortal body, against the tyranny of the mind over matter.”