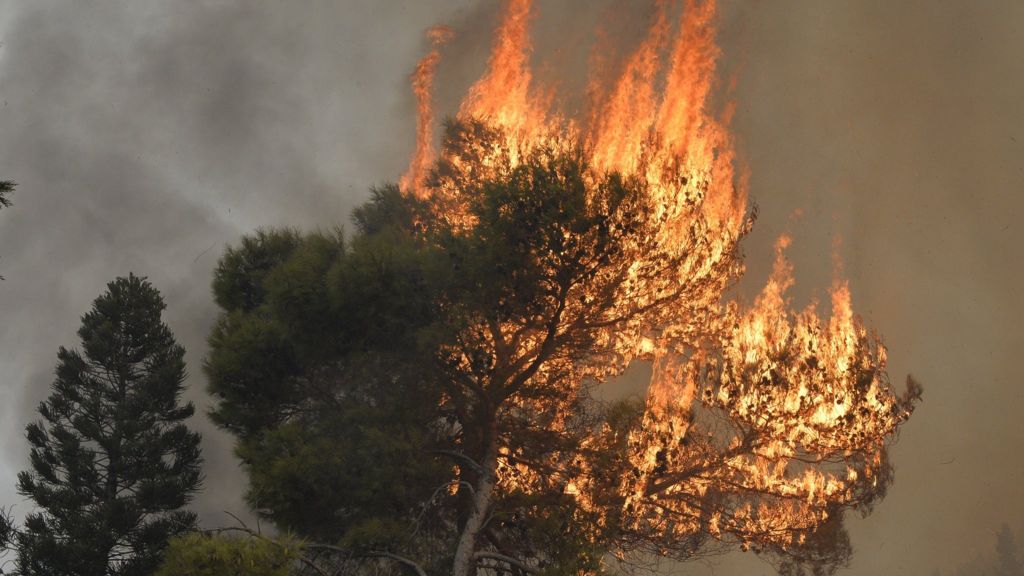 What has been quickly coined as a historical event, the Lebanon Wildfires 2019, is a series of more than 100 fires which broke out, spontaneously and simultaneously, on Sunday 13 October at night and spread over large areas of Lebanon’s forests, from the North of the country (Akkar) to the South (Chouf) and also in Syria according to some reports. The intensity of smoke clouds were said to have reached the entrances of Beirut, Chouf and Saida. There was no official – or unofficial -explanation to these fires.

The weather conditions were perfect for a fire. It was hot and particularly dry and windy. But it is hard to believe all of these fires started because of the weather. The probability is close to zero because fires do not start this way. There are no example of this phenomenon elsewhere. Also the fires did not touch Turkey or Israel. It was only Lebanon and allegedly Syria as well.

So if not the weather, what else could have caused these fires? More than 100. Simultaneous and spontaneous. Over a relatively wide geographic area.

It is interesting to note that many countries sent help to extinguish the fires. Cyprus, Jordan, Turkey, Greece. Others offered to send tree seedlings to reforest the burned forests. Only Israel took advantage of the event and built a concrete wall in a disputed area in Wazzani. The Lebanese Minister of Defense (Elias Abou Saab) told LBC it was a dangerous and provocative act. He said he will communicate with the concerned parties to take the necessary actions for this matter. (LBC has quoted him in this report in Arabic.) In order to build a concrete wall one needs to design and prepare at least a little bit in advance. Israel was ready.

More than a month earlier, on September 1st 2019, Reuter published a report titled: “Israeli drone dropped incendiary substance in border forest“. The Lebanese military said an Israeli drone, which violated Lebanon’s airspace, dropped incendiary material and sparked a fire in a pine forest by the border on Sunday. The Israeli military admitted in a statement the fires near the border in Lebanon “originate with operations by our forces in the area,” without elaborating.

In April 2019, a document was reported to the Lebanese authorities about a possible plan to destabilize Lebanon by attacking in all sorts of ways. This is the source: Secret Document Reveals Plans for Civil War in Lebanon, Israeli False Flags, and Invasion. It is worth quoting some of it, for future reference, to see how much of it turns out to be true:

The document details American plans to splinter the Lebanese Internal Security Forces, a domestic institution separate from the Lebanese Army. The plans involve Washington investing 200 million dollars into the Internal Security Forces (ISF) under the guise of keeping the peace but with the covert goal of creating sectarian conflict against Hezbollah with 2.5 million specifically dedicated to this purpose.

The document states the ultimate goal is to destabilize the country by creating a civil war in Lebanon which will “help Israel on the international scene.” The United States and Israel plan to accomplish this by supporting “democratic forces,” sounding remarkably similar to the same strategy used in Syria, Libya, Venezuela, and elsewhere.

According to the document, although “full load of our firepower will be unleashed,” they somehow do not anticipate any casualties. They do, however, expect the civil war to “trigger requests” for intervention from the Israeli Defense Forces (IDF) which Israel must only agree to after extreme reluctance.

The document says Israel will also play an important role by creating “covert false flag operations” as the conflict progresses. Perhaps these operations would include chemical attacks similar to the chemical attacks on civilians in Syria or even direct attacks on Lebanese or Israeli civilians to blame on Hezbollah and justify international intervention.

On 6 October, the USA announced they are moving out of Syria and are letting Turkey deal with the situation.

On 9 October, Al-Akhbar local newspaper reported the Russian Ambassador Alexander Zasypkin has accused the USA of attempting to create chaos in Lebanon and put pressure on Hezbollah resistance movement. “The crisis of shortage in U.S. dollars and the economic conditions imposed on Lebanon aim at creating chaos in the country in addition to targeting Hezbollah and its allies in the region,” Zasypkin said.

On 16 October, the Washington Post published an article by David Ignatus titled: Syria is lost. Let’s save Lebanon. It pleads against leaving Lebanon in the hands of Iran and bankrupting it. It pleads for a stronger nation freed from the Hezbollah and with better border control over Syria. It says: “The chief enemy of a strong, sovereign Lebanon is Hezbollah, which profits from chaos. It follows that a stronger Lebanon will, over time, weaken the Shiite militia.”

All of these little facts converge heavily. They consolidate the possibility that the forest fires of 13 October 2019 were a military operation. Probably Israeli and probably involving incendiary drones. This theory wins by far because other theories are too unlikely or borderline insane.

The purpose is psychological. A psyop to push people against the present government. Many articles in the press used terms like ‘Lebanon is burning’ or ‘Lebanon is on fire’ in a very repetitive manner. Articles quoted people’s posts accusing the government for its inactions or incapacity to stop the fire. Some comments were extremely harsh as if the government was responsible of the fires. Some articles insisted the fires continued for a week. (In fact it rained in the following days and the fires were off less than 48h later, on 15 October.) This article on Beirut.com is particularly apocalyptic. It ends by blaming the government.

On 17 October 2019, approximately one hundred civil activists were protesting against the new proposed taxes in and around downtown Beirut, blocking important streets. It was the beginning of a very large movement or “revolution”, a series of country-wide, non-sectarian protests.

In the short term, the protests are motivated by the Lebanese government’s failure to find solutions to an economic crisis that has been looming for the past year because of corruption, wasting public money and stealing governmental entities. In the long term, they constitute a reaction against sectarian rule, endemic corruption in the public sector, legislation (such as banking secrecy) that is perceived to shield the ruling class from accountability and failures from the government to provide basic services such as electricity, water and sanitation. (Wikipedia)

UPDATE 1: On 2 December, the news was made public by anonymous sources about the Trump administration releasing a military aid of more than $100 million to the Lebanese army end of November – less than a week ago. It was already approved in September but was delayed by the White House until now. Before it was approved there was a little debate about the issue:

Some pro-Israel members of Congress have sought to defund the Lebanese military, arguing that it has been compromised by Hezbollah, which the U.S. designates as a “foreign terrorist organization.” Republican Sen. Ted Cruz of Texas has long advocated cutting the assistance and is expected to introduce legislation that would bar such aid as long as Hezbollah is part of Lebanon’s government.

The Pentagon and State Department reject that view, saying the army is the only independent Lebanese institution capable of resisting Hezbollah.

Why give money to the army ? And why now ? Instead of giving to the poor for example… or to help in other sectors where money might be more needed. Why not to the firemen to improve Lebanon’s capacity to extinguish crazy forest fires?

This seems to echo the intelligence report from April 2019 quoted above. The report said that:

The plans involve Washington investing 200 million dollars into the Internal Security Forces (ISF) under the guise of keeping the peace but with the covert goal of creating sectarian conflict against Hezbollah with 2.5 million specifically dedicated to this purpose.

UPDATE 2: Many propaganda images and videos were found shared on social network. Some promoted the “revolution” using images of the fires! Some of them also showed images of streets flooded by rain water. It did rain a lot and some streets were truly flooded but the images were exaggerated and some videos (one of them showing a woman dragged water and saved by someone) were fake – taken from another place, not in Lebanon. The propaganda tried to pin the fires, the flooding and the banking crisis… on the present government. One image of violence against a woman was found to have been stolen from another event in 2003 somewhere in the USA.