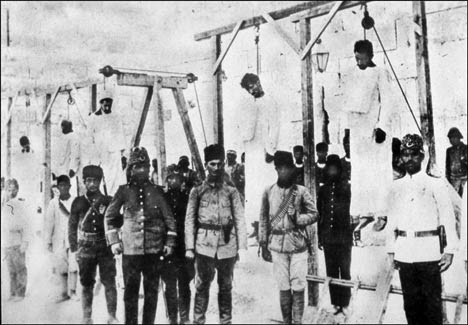 By Robert Fisk in Jerusalem, The Independent, 18 April 2001

One of Israel’s leading scholars of the Jewish Holocaust has angrily compared the country’s Nobel prize-winning Foreign Minister, Shimon Peres, to a holocaust denier after an interview in which Mr Peres made the astonishing claim that the Armenians – 1.5 million of whom were slaughtered by Ottoman Turks in 1915 – never experienced a genocide.

Mr Peres’ statement appeared in the Turkish Daily News prior to a recent state visit to Turkey; the paper says he went so far as to refer to the Armenian account of the mass slaughter as “meaningless”.

Israel Charny, the editor of the distinguished new two-volume Encyclopedia of Genocide, has written to Mr Peres, expressing his shame at the remarks and accusing Mr Peres of going “beyond a moral boundary that no Jew should allow himself to trespass”.

Dr Charny, who is also executive director of the Institute on the Holocaust and Genocide in Jerusalem, has reminded the Foreign Minister that Israeli academics signed a public declaration at a recent holocaust conference in Philadelphia stating that the Armenian genocide was factual.

To the fury of Armenians, and of Dr Charny, Turkey is funding a worldwide campaign to deny the facts of the Armenian holocaust which was unleashed by Ottoman rulers against Turkey’s Christian minority in the First World War. Tens of thousands of Armenian men were executed by Turkish forces in 1915, and their families deported to the Syrian desert where they were systematically plundered, raped and butchered by Turkish gendarmes and marauding Kurds.

Dr Charny, who devotes 45 pages of detailed factual evidence and copies of documents on the Armenian holocaust in his encyclopedia, was among those Israeli historians who refused to give in to Israeli Foreign Ministry pressure when Turkey objected to the inclusion of the Armenian slaughter in a 1982 holocaust conference in Tel Aviv. Dr Charny says Mr Peres telephoned him then, urging him “not to insist on including the subject of the Armenians”.

When Adolf Hitler was preparing the Nazi extermination of Europe’s Jews, he asked his Wehrmacht generals if the world any longer remembered the Armenian genocide; but Israel has often adopted an ambiguous attitude towards the 20th century’s first holocaust.

Unwilling to antagonise its present-day Turkish ally – and in some cases unwilling to compare Armenian suffering with that of European Jewry – the Israeli Foreign Office persuaded the Jewish Holocaust survivor Elie Wiesel to withdraw from the 1982 conference’s debates on the Armenians.

In Dr Charny’s unprecedented letter to Mr Peres, he says: “It seems that because of your wishes to advance very important relations with Turkey, you have been prepared to circumvent the subject of the Armenian genocide in 1915-1920 … it may be that in your broad perspective of the needs of the state of Israel, it is your obligation to circumvent and desist from bringing up the subject with Turkey, but, as a Jew and an Israeli, I am ashamed of the extent to which you have now entered into the range of actual denial of the Armenian genocide, comparable to denials of the Holocaust.”

The Turkish newspaper states Mr Peres said Israel should not determine a “philosophical position” on the Armenian holocaust. “We reject attempts to create a similarity between the Holocaust and the Armenian allegations. Nothing similar to the Holocaust occurred. It is a tragedy what the Armenians went through but not a genocide.”

If Mr Peres has been quoted accurately – and he has made no attempt to correct the newspaper – his remarks will deeply offend millions of Armenians. It is standard Turkish policy to refer with contempt to Armenian suffering as “allegations” and to downgrade the Armenian holocaust as a mere “tragedy”. To the relief of the millions of Armenians descendants of the 1915 bloodbath, Dr Charny has never wavered. His encyclopedia states bluntly that both the Armenian and Jewish genocides were the products of state-initiated policies. “The Armenian genocide occurred under the circumstances of the Turkish revolution and the First World War,” it says, “while the [Jewish] Holocaust was a product of the Nazi revolution and the Second World War.”

Turkey maintains, despite US diplomatic evidence at the time, that the Armenians were mere victims of a “civil war”. An American diplomat, Leslie Davis, the US consul at Harput, saw the bodies of thousands of Armenians in the Turkish countryside in 1915, many of them knifed to death. “A massacre, however horrible the word may sound, would be humane in comparison,” he wrote.