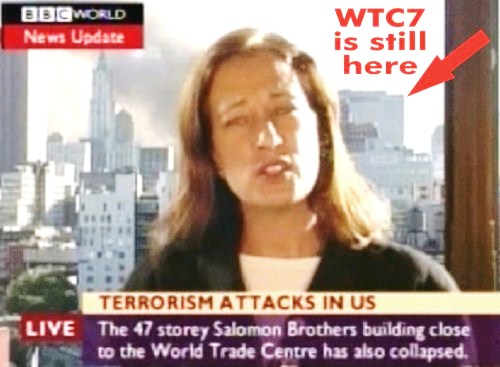 The third building (WTC 7) was not hit by planes. There was a fire inside for a many hours and then it fell down. Officially because of the fire. But scientists and control demolition experts do not agree. Absolutely all the INDEPENDENT scientist, engineer, demolition expert as well as many witnesses agree together that the WTC7 building was brought down by classical controlled demolition. There is no debate about it. People who deny this are denying the laws of gravity and science in general.

Why the evidence is so overwhelming:

* The visible free fall of WTC7… Controlled demolition expert Dany Jowenko says it all. He was shown the footage without being told this was 9/11 in NYC. He was told only after he confirmed what he was looking at was OBVIOUS controlled demolition.

* The early announcement on TV before it happened (the building can be seen in the background while the BBC journalist says it has collapsed!)

* The confession of the owner of the lease of the building… Larry Silverstein admits on camera he was told early that day the decision was made to “pull” the building.

* Witnesses of the fire inside of the building

Due to the controlled demolition of WTC7 alone, one can safely assert the entire 9/11 event was allowed to happen and was – at least partially – some kind of inside job. Only because such a controlled demolition takes a week or two to prepare. It is also safe to assume the CIA or the Intelligence Community in general is involved in some way because they had their offices in the WTC7 building!

Of course this immediately demands a full investigation. The 9/11 Commission Report was a joke. It was “set to fail” according to its members. The lack of investigation by the US government and the silence of all western democracies pushed “we the people” or “the people of good will” to do the job. And so they did. And thanks to the Internet, they did very well.

9/11 – Anatomy of a Great Deception (documentary)

“It started with an innocent question about 9/11. And that lead to more innocent questions. And after a while, I completely changed my opinion of the official story of that day. That was a very hard time in my life. It felt like my world was turned upside down. I couldn’t stop researching. I was unemployed. And I was running out of savings. I tried talking about it, but felt like no one was listening. At the time, my wife didn’t even believe me… nor did my friends and family. No matter what I tried, nothing worked. So, to preserve my sanity and save my marriage, I began putting this film together. I had no idea any of this would ever happen because I simply made it for my wife, my sister and a couple of dear friends. I made it to speak to them directly, to get them to open their eyes. And it worked, because just all my friends and family that have seen it have changed their opinion about 9/11, maybe all by the time you read this!”

About the video footage of ground zero by Kurt Sonnenfeld… and his following persecution by the US government:

Kurt Sonnenfeld (born 1962) was a videographer for the U.S. Federal Emergency Management Agency (FEMA) prior to 2002 and was one of four FEMA photographers who were given exclusive access to the World Trade Center site following the September 11 attacks in New York in 2001.

In addition to the photographs and video he took on behalf of FEMA, he is reputed and claims to have taken additional video footage as well as numerous photographs, some of them since published. He claims these recorded images will provide evidence that the U.S. government had prior knowledge of the 9/11 attacks. As of August, 2010, he is seeking such experts to review his footage.

Sonnenfeld is living in exile in Argentina. The US government want him extradited under the pretense that he killed his ex-wife.

This documentary is based on a group of expert pilots and focuses on the itinerary of the planes. (It is not about the demolition.)