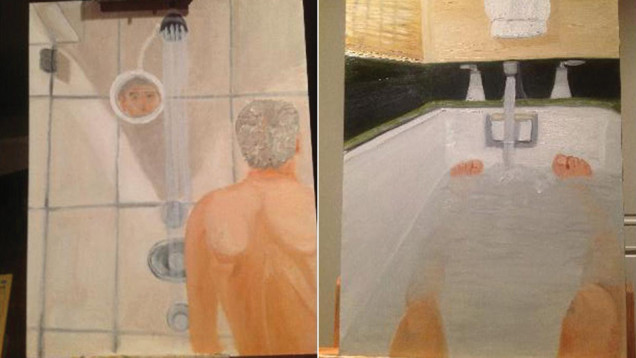 At the age of 67, George W. Bush starts to paint. He starts on his iPad with an app. He sends drawings as messages to people. Later he moves to real oil painting. The first ones, the ones that were leaked beyond his consent, are the most revealing.

The other paintings that he willingly made public later seem to be a form of auto-censorship he applied to himself… Made out of “negative content” as has commented proeminent Art critic Jerry Saltz.

This news all started with a leak of a few paintings thanks to a hacker named Guccifer. They are self-portraits of Bush in his bathroom, from the back, naked, looking at his reflection.

Years later, he continued with portraits of presidents and political figures!

NY Times art critic Jerry Saltz says: “But truth always will out. Bush has returned once and probably for all to aping the idea of what a painter does. Now, as during his presidency, he acts the role. He lacks his own ideas, and substitutes a notion of how past leaders have acted. We get an ersatz picture of how he learned to behave like a leader — just as in the funny way he used to hold his arms out when he walked around the White House, or when he was on the golf course threatening terrorists and then telling reporters ‘Now watch this drive.'” (read the full article)

+ An earlier article and a VIDEO with Jerry Saltz where he talk about the first Bush paintings. The one he liked. The revealing and interesting ones in the bathtub where Bush shows a bit of “his inner world”…

This one is a parody video by The Onion: