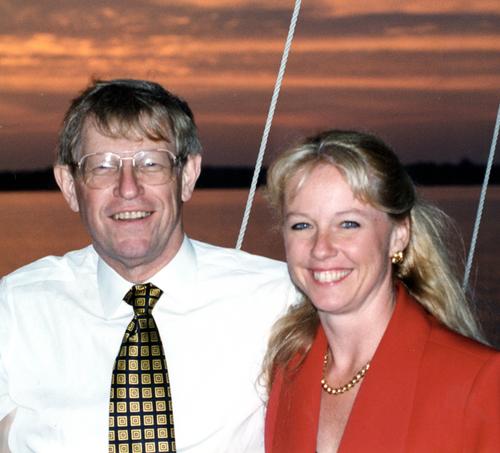 Ted Olson is a key character in this story mainly because his wife Barbara Olson was one of the victims. She allegedly called him from the plane during the attack. The account of the conversations he had with her is essential to the 9/11 story. Without his testimony we would know almost nothing about what happened inside the planes (no muslim terrorists with box cutter and so on). He changed his testimony a few time. The FBI exposed him because they confirmed he received the phone calls from Barbara… but they added the calls never went through and lasted exactly zero seconds.

Ted Olson is very close to G. W. Bush. He was instrumental in his first election in 2000. He successfully represented the presidential candidate in the Supreme Court case Bush v. Gore, which effectively ended the recount of the contested 2000 Presidential election.

Much earlier in his life, Ted Olson defended the famous Israeli spy, J. Pollard. He lost the case and Pollard was given life sentence. Olson is obviously an Israeli asset. And as we know Israeli agents executed most of the events on 9/11.

Barbara Olson was in flight 77 that allegedly crashed into the Pentagon on 9/11 scheduled from Washington DC to Los Angeles. She was a journalist. A famous republican neocon working for Fox News. She was a lawyer like Ted. She graduated from a Jewish law school. Both Ted and Barbara were dedicated zionists and dedicated neocons.

We were told by Ted that Barbara rescheduled her flight at the last minute to join him on his birthday… It seemed he asked her to do so. According to Ted, she called him twice from the plane. This was later proven to be impossible. They never spoke. So Ted Olson lied. Period. There is no doubt about it. He said exactly what he was told to say to help build and solidify the official 9/11 narrative.

What happened in reality, we do not know. Most researchers agree the plane was a drone. The phone calls from other passengers were released much later by the US gov. They have been proven to be faked (by the passengers themselves, who probably accepted to participate to what they were told was a drill).

Tod Olson contradicted himself 3 times. He said Barbara called him twice during about 1 minute each time. The second call he says, was a collect call from one of the phones that were in the plane… and he says it went through the Department of Justice.

It was later confirmed there was NO phones on this plane… So all calls must have been from her cell phone… The problem is that it was not possible to call from a cell phone in a plane flying as high as the plane was flying at, according to the official narrative, at the time of the alleged call. It was technically impossible. So if the call was real, the plane was flying much lower… or never took off… maybe it stayed on the ground in some airport.)

Later, in 2006 the FBI released the following information: the alleged call from Barbara to the Department of Justice did NOT connect (it lasted ZERO seconds). So according to the FBI there was no calling time… no conversation… no call at all.

The content of the calls that Ted Olson reported… were crutial for building the 9/11 narrative. This point alone is extremely suspicious.

Ted said that Barbara told him that:

* they were more than one hijackers
* they hurled the passenger at the back of the plane, the pilot included
* they had just knifes and box cutters
* he told her about the planes in the WTC
* she was extremely calm

This is very important: Ted Olson has a history of producing false testimony in court for political cover ups.

Olson served as United States Solicitor General from June 2001 to July 2004 under President George W. Bush. He has a serious record of defending and covering up “conspiracies” since his work under Reagan on the Iran Contra. He is used to working on political affaires for the US government.

He was accused of false testimony…. and lost one big case… so he had to return to private law practice. This is huge. There are more details on his wikipedia page.

Question: Is Barbara really dead? Since Ted admitted he told her to take this flight… He have to assumed he murdered her… So did he sacrifice his wife? Most probably not.

Olson has been married four times. Barbara was the 3rd. They were married for 5 years. On October 21 2006, Olson married Lady Booth (funny name) presented as a tax attorney from Kentucky and a lifelong Democrat. According to the NY Times, they started dating 4 and a half years earlier. That would be in the beginning of 2002. A few months after Barbara’s death.

One theory is that Barbara Olson went through a major plastic surgery. It is not at all impossible. As crazy as it sounds, it actually makes more sense than any other theory. Because it perfectly fits all the facts we know about Ted’s words and his cold attitude on September 11.

There are videos online of “Lady Booth” speaking in public. So one can easily compare attitude, movement of the head and hands, haircut and so on… Everything fits. 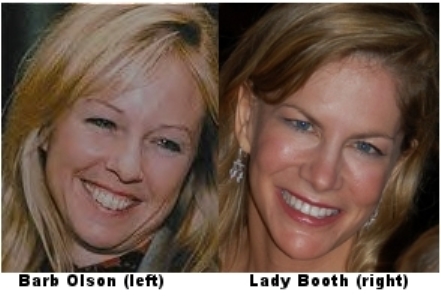 One objection to the theory that Barbara and Lady are the same person… is that Lady Booth had a history that pre-dated 9/11… but this history is ridiculously poor.

I am quoting an article: “After a diligent search, I found only one indication that she even existed prior to December 2001. Records indicate that, in 1988, someone by that name was licensed to practice law in New York, and she was said to have practiced law for 21 years. (Click here.) The telephone number listed as hers, (703) 389-2842, was for an address in Vienna, Virginia, a few miles from CIA Headquarters in McLean, Virginia. (Click here.) During the early 1990’s, Barbara Bracher (later Barbara Olson) also lived in McLean. (Click here.)”

(The question that follows immediately is what happened to the passengers? Were some of them killed in a hangar while other were saved? Were they all saved and re-inserted under false ID’s in maybe in another country… with a good pay and some sort of contract… maybe recycled as CIA assets in a city of their choice… We know they can do it and they have done it many times… We know they did it with Barbara… so this must be considered for if not all maybe some of the other passengers. There is an article on this blog speculating about what might have happened to the passengers.)

Barbara was and is still celebrated every year as a symbol of a proud America. A martyr and an example among hardline republicans. Ted Olson never showed a single bit of emotion for Barbara. Not even a little. He was far from “devastated”. He only expressed a cold stoic and patriotic pride from the start… on the day of the event. Praising her in a formal way as symbol for America. Never as a woman he loved. 10 years later, in a commemoration speech he did the same… He mixed her with the thousands of innocent deaths “for America”. Very cold and propagandish, just like he never “lost his wife”.

These are some quotations by Ted Olson followed by my comments:

“This matter pertains to information that is required to be kept under seal.” (He knows how to lie and how to keep important national secrets.)

“Well, she managed to – Barbara was capable of doing practically anything if she set her mind to it. In retrospect, I’m not surprised that Barbara managed to get collect calls through.” (no comment)

“My wife had taken off on a plane. Two airplanes had crashed into the World Trade Center. I, of course, like any other person, felt potentially devastated, panicky a little bit.”

“The plane took off at 8:10 in the morning – or that’s when it was scheduled to take off. And that’s when I believe it took off. I had been in my office at the Department of Justice. Someone told me that there had been the two strikes that occurred at the World Trade Center.” (why didn’t someone tell him immediately? after the FIRST strike? it sounds like “hey by the way 2 planes stoke the WTC”… not realistic…)

“The calls that I have received from President Bush and Vice President Cheney, the fact that there are other people that are suffering every bit as much as I am, and that our whole nation is going through a tragedy together, I think we have to think about those things.”